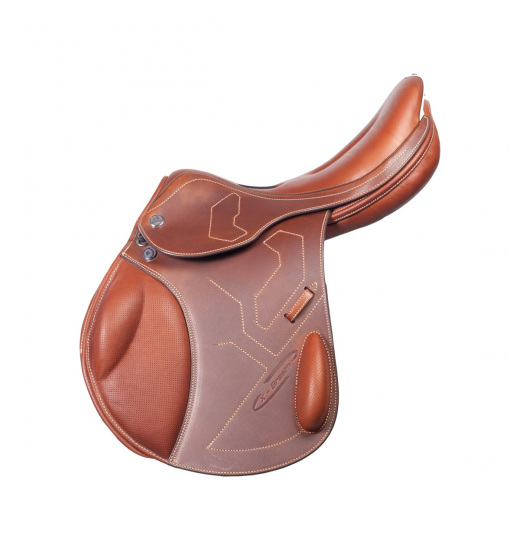 Prestige presents its X-Breath K, the single-flap version of its ultra-light saddle. Two apertures on the seat give this saddle a distinctive appearance: the large oval aperture towards the rear and the second, smaller, oval aperture to the front. The holes perform both an air-circulation function that facilitates the passage of air and, accordingly, the cooling of the horse and the rider, and a therapeutic function: actually the rear aperture keeps pressure off the coccyx; the front aperture, when the horse lands after jumping – especially in cross country events – absorbs the impact through the saddle.
The apertures are covered with a special highly elastic honeycomb material that makes the seat more comfortable. The saddle has further holes and apertures on the flaps to lighten the weight and to improve air circulation. Like the double-flap version, this model has new ultra-light panels coming from the X-Technology and made with a new honeycomb material that has considerable stretch capacity and takes the place of felt and terry cloth. The effect obtained is an appreciable reduction in the thickness of the panels. At the same time stability is retained as, too, the comfort felt by the horse along its back.

Cavaliada is definitely the most important equestrian event in Poland. Everybody is[...]

10 other products in the same category:

10 other products from the same manufacturer: